We found our home in the ACI Marina Split, which is located in the southwestern part of the city’s port and guarded by solid rock breakwater that protects the Marina from winds and waves. This location offers a magnificent view of Diocletian’s palace and Split’s promenade.

Since the port may get very busy because of the ferries and yachts, sailors are advised to be extra careful when arriving with their yachts. . It is recommended not to disrupt the right of way in maneuvering, since the ships that are leaving the port have the right of way. Also it is only allowed to anchor in the port in cases of emergency.

When entering the port, you can use several landmarks for orientation, such as the bell tower of the Cathedral of St. Domnius, Cape Sustipan that has a red tower with a red light, a stone monument to seafarers in the shape of a lighthouse, which is in fact a lighted stone obelisk, while on the right-hand side of the entrance to the port, on the top of the main breakwater, there is a prominent green lighthouse, which is equipped with a fog signal and a 30-second horn. You will recognize the marina for its white stoned buildings where the reception, offices and shops are located, as well as our base office.

Marina is located 20km from the international airport. The main bus station, train station and ferry port are located 1500m from the Marina.

Bus station, port and train station are located some 1500 m from the Marina and the international airport is only 20 km away.

Our base! A city rich with history, culture and entertainment makes it the perfect city for you to visit in addition to your sailing adventure! Split is the perfect place for you to experience how life in Dalmatia truly is and is just the right balance between tradition and modernity.

Split is the home to Diocletian’s Palace (a UNESCO World Heritage Site and one of the world’s most impressive Roman monuments) but also has been the host city of Ultra Europe music festival, the biggest electronic music festival in Europe. 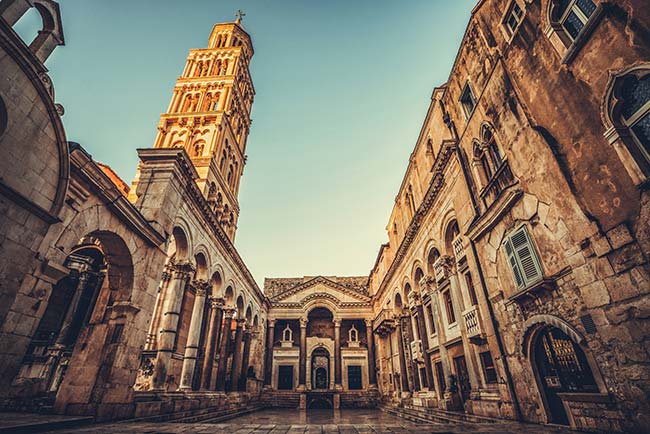 Adding to its own excellence, Split is surrounded with beautiful locations such as the city of Trogir and Klis, a city located around a mountain fortress.

Most importantly, Splits location is perfect for an amazing nautical route that can include some of the greatest islands in Croatia and even the Adriatic – Brač, Šolta, Hvar, Vis, Korčula and many more. Croatia has the second most indented coast in Europe which makes it the perfect destination for your sailing experience.